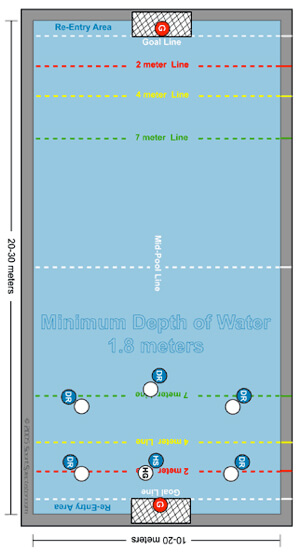 Water polo is played as a 6 on 6 game plus goalkeepers, so each team has 7 in the water at a time. How long is a game? Each water polo game is made up of four, 5-minute, quarters. Total squad size is 13 players. If there are less than 6 swimmers in the water, a team does not have to have a goalie. Substitutions may be made at any time during a game (like hockey) but the players must make the exchange in a specific area behind their own goal line, called the re-entry area.

The game starts with all players lined up at their own goal line. The referee blows a whistle and throws the ball into play at mid-pool. The swimmers sprint to their positions, with some players from each team swimming to get possession of the ball.

Players try to throw the ball into a goal. No one except the goalie may touch the ball with more than one hand at a time. The ball is not to be totally submerged at any time.

Swimmers either pass the ball to other teammates, swim with the ball bouncing and floating between their arms as they move forward (sort of like dribbling a basketball), or take a shot at the goal to score a point. There is a shot clock; a shot must be taken before time expires or ball possession changes.

A goal is scored when the ball completely crosses the goal line, an imaginary surface across the front of the goal. The ball could go part-way in and be pulled out by the goalie and would not be scored. The team scoring the most goals at the end of regulation time is the winner.

All fouls result in a change in possession of the ball or a penalty shot if it occurred within a zone 5-meters from the goal. There are minor fouls (one whistle blast from the referee) which results in just a change in possession. A major foul (two whistle blasts) results in the guilty player removal from the game for a 20-seconds, which creates unbalanced situations. When possession changes, the offense gets a free throw from the spot of the foul, an unhindered chance to pass the ball to another player within about 3-seconds.

Examples of fouls include:

There are two floating goals, one secured at each end of the playing area. The goal usually has a flat front surface and is lined with a net. It is 3-meters wide and .9 meters high

The pool is deep enough (1.8 to 2 meters) to prevent swimmers from touching or pushing off of the bottom. The field of play is marked with lane ropes, swimmers are not permitted to touch or grab them in any way. They may not push off of them (or off of any wall) either. The pool is 30 meters long between the goals for men’s games, 25-meters for women. The pool is 20 meters wide.